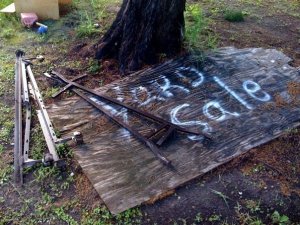 So in preparation for my upcoming Perseids meteor shower watching party (keeping my fingers crossed for clear skies…), I was hunting for a fire pit or fire bowl to purchase or borrow for the evening. I mean, what’s a night under the stars without a fire and some s’mores, right?

I initially contacted my friend Rick from church. I vaguely remember that he and his wife had some kind of brazier/fire bowl on their back porch, but could not recall exactly how portable it was. I emailed him, asking him if it would be possible to borrow. He kindly informed me that their fire bowl weighs a good 300 lbs, so unless I enlisted the help of a small construction crew and a light crane, I probably would not be able to use that one.
Slightly bummed at that closed door, and even more disconcerted that my observational powers/memory had failed to recall that their fire bowl was even that large, I turned to Google.
After a bit of Googling, I realized that a standard fire bowl purchased through a store like Outdoor World easily costs $99. The cheapest one I found through an online store was $69 and would have to pay for shipping. No Sirree.
As a last resort, I decided to delve into the sketchy world of craigslist. I have only purchased used books through craigslist before, and this was through someone who works at my office, so it wasn’t totally unknown.
Much to my delight, I found a used fire bowl, slightly charred but decent enough looking for $15. I saw the charring and a bit of dirt inside, but I realized that such blemishes were acceptable since I would be building a fire in it, not serving punch. I contacted the seller, saying I was interested in buying, and she immediately proceeded to give me directions. She said the place was located in “Bithlo.”
I had never heard of Bithlo, but I immediately scrambled for pen and paper and tried to jot down the directions as she gave them to me. In the back of my mind, I was slightly curious why she didn’t simply give me an address so I could mapquest the directions myself.
Then she said “Make a left on Sixth Street and go past Belvedere and we’re the second trailer on the right.”
Oh. That’s why she didn’t just give me an address. Sketch.
However, I was overjoyed with this little bargain, that I decided that a little foray into the sketchy side of town would be worth it. So I told the nice lady on the phone that I would come pick it up Saturday. She said, “Great, we’re having a yard sale on Saturday anyway, so there will be people coming through.” Wonderful.
Last night, I was relaying this story to Courtney and Oscar, the full weight of the sketchiness overtook me and I realized it would probably be wise to bring someone along on this little adventure. Oscar informed me that Bithlo was basically four junkyards and a bunch of trailer parks and he kindly offered to accompany me (especially after I mentioned the yard sale) to be my protector should something go awry in Sketchy City, so we planned on an early morning.
The next morning, we were driving east on Colonial, I began to feel like I was less in Orlando and more in the bayou. We followed the directions and ended up at the trailer. The yard was covered (littered?) with exercising equipment, rocking horses, appliances, toys, knickknacks, paddywhacks, and all manner of odds and ends. It really looked more like they had this stuff randomly strewn across their lawn and just decided to post a sign (white letters painted on plywood).
Wow.
Also, there wasn’t anybody out and about, only one guy who kept coming in and out of the front door. I told him I was there to pick up the fire bowl. I really wasn’t sure how big it was, or if it would even fit in my trunk, but it was the perfect size and it fit right in my trunk. Oscar said I could light the fire in my trunk if I wanted to. I told him that was a good idea, but I’ll pass;)
Anyway, sucker for yard sales that he is, Oscar wondered if we could stop by another yard sale that we had seen coming in, so I thought, sure why not. So we did. I didn’t think there would be a whole lot there, because I mostly saw little kid’s clothes and My Little Pony and Polly Pocket ware.
They did have a litter of 8 week old puppies that they were giving away for free. They were so cute… I definitely would have taken one, but Miriam would probably kick me out of the house. I did play with them for a good 10 minutes though.
I ended up finding and buying a breadmaker for $7. So hopefully I will use it. hehe;)
In the end, my foray into Sketchy City/Po-Dunk Town a.k.a. Bithlo turned out to be quite enjoyable.
Now I just hope the rain holds up and the skies are clear to make this whole adventure worthwhile;)

3 thoughts on “Way Down in Po-Dunk Town”