My sister’s birthday was yesterday. After a marvelous brunch at Cask and Larder, she decided she wanted to see the new movie “Begin Again,” starring Mark Ruffalo, Keira Knightley and Adam Levine. It was written and directed by John Carney, the same man behind “Once.”  In fact, some people had been describing “Begin Again” as an American version of “Once.”

Even the movie posters look similar: 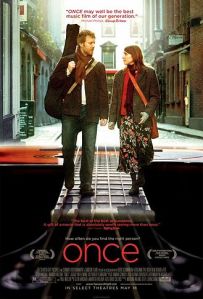 As an aide, when I say “Once” is one of my favorite movies of all time, that is a vast understatement.

I was a little hesitant at first to see “Begin Again.” “Once” had so profoundly moved and inspired me, I was skeptical that any movie trying to pull off something similar would be able to come close. I was skeptical even in the first couple of scenes and I found myself trying to decide if I liked this movie.  It’s difficult as a singer/songwriter to immediately tune out the music critic in me.

There is a whimsical turning point about 15-20 minutes in, where the film finally won me over.  I won’t give away completely, but it involves Mark Ruffalo standing in a club in the East Village, transfixed by something he hears.  While “Begin Again” isn’t quite as raw and magical as “Once” was for me, it’s still quite a good film with great music.  Because of Spotify Premium and an infinite amount of mood playlists, it’s been a long time since I’ve downloaded an entire album and have listened non-stop to the same music.  That changed with “Begin Again.”  There was another lovely scene involving headphones and wandering the New York Cityscape, which I enjoyed, especially since I had just been wandering around the streets of NYC last week.

Overall, the movie–while it was certainly no “Once”–was great and definitely worth seeing, especially if you love music (songwriter or not).